(This post was originally published in December of 2010. Few changes have been made, if any.)

While living and working in Philadelphia in the early 2000’s, I often visited my in-laws in Haddam Neck, CT with my family.

My wife, Molly, and I went to the shop of one her family’s very good friends, Don Boule. When I first went into his shop, there was a sleigh bed that was, probably, 60% complete. One of the finials was carved, one was not. I distinctly remember asking ‘how do you get from this (pointing at the unfinished) to that (pointing at the complete)?’ Don smirked and chuckled. I was not, after all, a woodworker.

Don quickly explained and then showed us his kitchen, his dining room table and chairs, various other chairs and tables throughout his house, his built up crown molding, the stretchers and molding on his staircase, the highboy inside the front door of the colonial he built and much more. He told us a little bit about each piece, including how he afforded himself the time to self-indulgently make after working wood professionally all day.

I was hooked at that moment.

On the drive back to Philadelphia I justified my newly acquired hobby, woodworking, to my wife. I bought a miter saw promising to install a chair rail, crown molding and shadow boxing.

I then bought a router to make the molding. 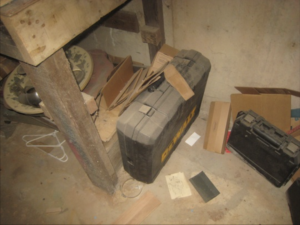 I soon called Don up and asked if I could spend a week in his shop sanding while on my next vacation in Haddam Neck. This week happened and on the subsequent drive back to Philadelphia I bought a table saw, jointer and planer. I started to lock myself in my basement at nights with the intention of working towards an armed chippendale chair, like Don had in his shop and in his house.

I am now living in Haddam Neck, CT as a full time planemaker. I had brought a few pieces of Don’s up to enter into the competition at the NWA Woodworking Showcase, 2010 where I hosted a booth in Saratoga, NY. Don and his son/partner Chris have been making a few pieces to enter (and they’re both awesome). I intend to bring them up this coming year too (2011).

While at my brother-in-law’s house for Octoberfest, Don and Chris threw down the gauntlet when they asked me, “what are you going to enter?” I assured them that I don’t have time because orders need to get out the door. Don again smirked and chuckled.

So here it is: 1 Queen Anne dressing table with 4 months to the deadline. Can it be done? More importantly, can I do it? (Chuck Bender is laughing somewhere.) 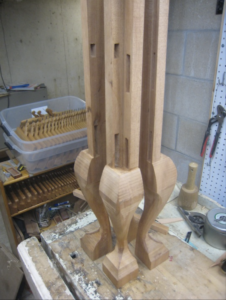 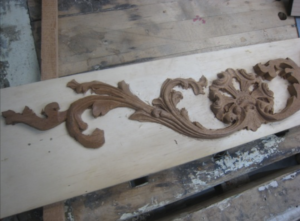