Ideally, a snipes bill will be the first molding plane to touch most of your work. This plane, with its acute edge, is used initially for following and defining the gauge line for a rabbet plane to follow. Only a few passes are necessary before moving on.

Subsequently, a snipes bill plane will be used for striking the many sharp depressions that can be found in linenfolds, side beads and other various quirks. Two are necessary so it’s possible to keep the plane properly oriented while planing with the grain (i.e. linenfold) 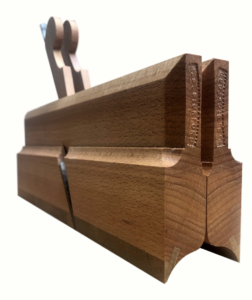